The Fire in Hell 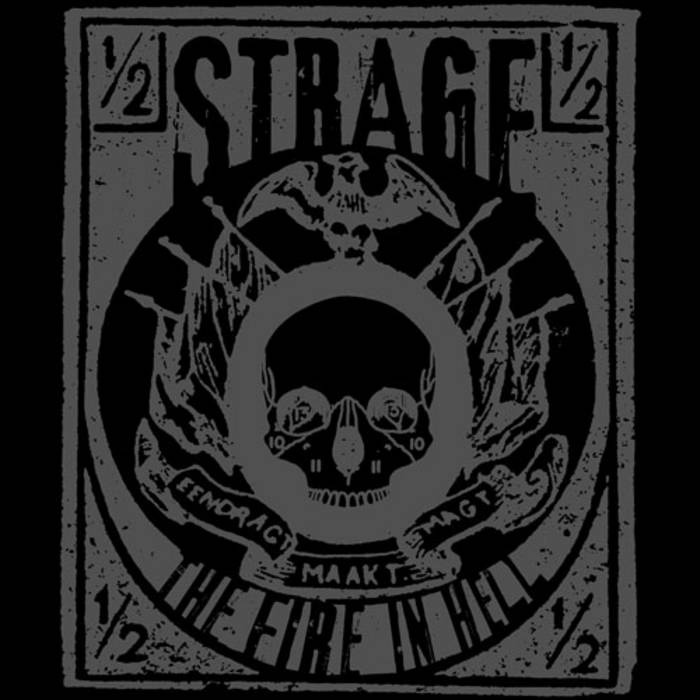 Some notes on how we recorded 'The Fire in Hell' album:
We used 2 Shure microphones plugged into a Zoom H4.
How did we get the levels between instruments right? Trial and error - many test recordings and experimenting with position of guitar and bass cabs. We found the most difficult thing getting the bass drum captured properly. This is why we ended up placing the microphones at floor level in front of the bass drum.
Next was guitar tone. The fact that we couldn't use the age old recording trick of doubling the guitars (to get that 'huge' sounding guitar tone what every band does is do TWO takes of a guitar and pan each hard left and right on mixdown - the differences in each performance make it sound bigger and 'fuller'). Obviously we couldn't do this, so we set up the guitar cabs either side of the kit also in line with the mikes and played through a few songs trying guitar at different volumes. We ended up with it being extremely loud, just the way we like it.
Next was bass guitar. Normally you want bass guitar smack down the centre of the stereo image with the bass drum... We set ours up slightly off centre and behind the snare drum. Being that it was further away we really cranked it as well. Jono plays through a 2x15 cab so a lot of air gets moved around, this ended up sounding incredibly satisfying on listening back.
Next.. we pushed record on that H4 and played. That's right, everything on "The fire in hell" is a live recording with us all playing together - no overdubs of anything. What you hear is what you get if you were in the room or at a show with us. One aside though, with the 12min track 'Crawling towards a hole' we broke the recording into 3 separate sessions and edited those bits end to end to make the complete song.
Once the recording was complete, the wave files were dumped onto PC and mastered using Steinberg Nuendo and Izotope Ozone4. Obviously due to the frequency capturing characteristics of the Shure mikes we needed to tweak the EQ some what. This was done by doing a simple frequency match to a mastered song by Cult of Luna that we liked the sound of.
Because it cost us nothing to record other than our time and passion we thought it only right we put it up for free download: www.strage.co.za has it all.
We also made 50 limited edition digipak CD's and tshirts as collectors items as some people still prefer having a hard copy of their music and like our band enough to wear us on their chest. We are deeply thankful for this support and now have a few of these left.
If anyone has any questions, please feel free to ask. Thank you.